When war broke out in Europe in the summer of 1914, a sense of dread rippled through the American business community. So great was the fear of contagion from tumbling European markets that the New York Stock Exchange was closed for more than three months, the longest suspension of trade in its history. 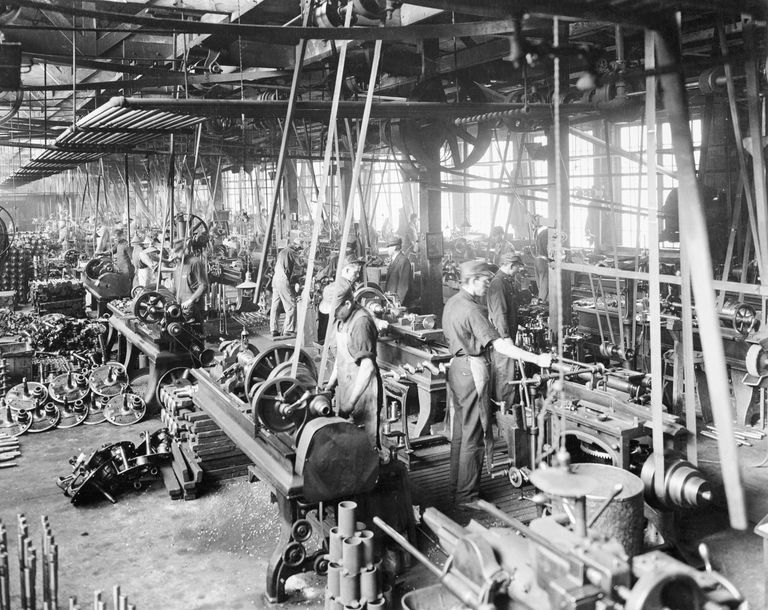 American automobile factory during WWIAt the same time, businesses could see the enormous potential the war might bring to their bottom lines.
The economy was mired in recession in 1914 and war quickly opened up new markets for American manufacturers. In the end, World War I set off a 44-month period of growth for the United States and solidified its power in the world economy.
A War of ProductionWorld War I was the first modern mechanized war, requiring vast amounts of resources to equip and provision massive armies and provide them with the tools of combat. The shooting war was dependent on what historians have termed a parallel “war of production” that kept the military machine running.
During the first 2 ½ years of combat, the U.S. was a neutral party and the economic boom came primarily from exports. The total value of U.S. exports grew from $2.4 billion in 1913 to $6.2 billion in 1917. Most of that went to major Allied powers like Great Britain, France, and Russia, which scrambled to secure American cotton, wheat, brass, rubber, automobiles, machinery, wheat, and thousand of other raw and finished goods.
According to a 1917 study, exports of metals, machines, and automobiles rose from $480 million in 1913 to $1.6 billion in 1916; food exports climbed from $190 million to $510 million in that same period. Gunpowder sold for $0.33 a pound in 1914; by 1916, it was up to $0.83 per pound.
America Joins the FightNeutrality came to an end when Congress declared war on Germany on April 4, 1917 and the U.S. began a rapid expansion and mobilization of more than 3 million men.
“The long period of U.S neutrality made the ultimate conversion of the economy to a wartime bases easier than it otherwise would have,” writes economic historian Hugh Rockoff. “Real plant and equipment were added, and because they were added in response to demands from other countries already at war, they were added in precisely those sectors where they would be needed once the U.S. entered the war.”
The international economic position of the United States was permanently altered by the war. The United States had long been a debtor country. The United States emerged from the war, however, as a net creditor. The turnaround was dramatic. In 1914 U.S investments abroad amounted to $5.0 billion, while total foreign investments in the United States amounted to $7.2 billion. Americans were net debtors to the tune of $2.2 billion. By 1919 U.S investments abroad had risen to $9.7 billion, while total foreign investments in the United States had fallen to $3.3 billion: Americans were net creditors to the tune of $6.4 billion. Before the war the center of the world capital market was London, and the Bank of England was the world’s most important financial institution; after the war leadership shifted to New York, and the role of the Federal Reserve was enhanced.
In 1918, an unusually severe and deadly influenza pandemic that became known as “Spanish flu” or “Spanish influenza” spread across the globe. The majority of victims were healthy, young adults, in contrast to typical influenza outbreaks that predominantly affect infants, elderly, or already weakened patients. An estimated 50 million people died, 34 million more than the number of lives lost in World War I. The virus struck a fifth of the entire world’s population, making it one of the deadliest natural disasters in human history.